This is the first Ten-Headed Skeleton Cassette and my first release on another label since 2011. Bonding Tapes hit me up about releasing a tape in December. I started the project that day and had the 20 track album completed in 2 weeks. It was called “Cannibal” because Asian men are taboo in the music industry, the movie industry, and American women. Around Spring we were informed the cover photo I bought was a reprint and someone else had already used it. I didn’t have a back-up idea, but I did possess a newer 14 track album that was 85% complete with a cover photo I took myself in 2005 at Edgemont/Fountain Apartments in Los Feliz with a disposable Kodak camera and a fabricated mess for a photo shoot in my bathroom caused by my roommates. It is the album you’re hearing today, “Eating Flesh Off Bones”. I made some finishing touches and it was ready in a week. Then another week later I found a satisfying cover for “Cannibal” and agreed with Bonding Tapes to release it on cassette at a later date. In the meantime please enjoy “Eating Flesh Off Bones” featuring collaborations with some friends: (In Order Of Appearance) Big Epoch, K-The-i???, Tolliver, Bullets Are Extinct, Ohm Aota, & Bizzart aka Gothic Cholo. 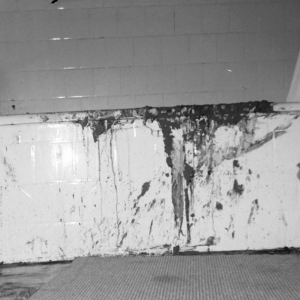