I embraced my issues and decided to break the Asian stereotypes that we have it “made” and showcase mine in music, then that transcended into a reality show because there’s obviously stuff I would never rap about that wouldn’t work well in song but work better  in video.

Before I recorded a second of this footage I was going to call the series, “The Great Narcissist Show”. Because that’s all it seemed it was going to be to me.

But I’m glad I kept the title more open for interpretation.

Someday I’m going to die. And that’s the largest reason I wanted the show to exist. I have always had this burden as a rapper, that people assume a bunch of hip-hop stereotypes when I say that to people who don’t know me when asking for shows or for press.

I wanted to show people I’m not like other rappers. Even though I’ve written/said it plenty of times in my lyrics, people just don’t get it. So, fuck it, I’ve wasted many years trying to convince people through their ears only. It’s time to flex my video editing skills and show them how I am in real-time. Use what you got to get what you want.

I think I’m too apathetic to be concerned about the casual or one-time viewers criticism. I began the show fully aware how self-serving it was going to be. I already foresaw that it’s just another form of petting my narcissist yet humble ego, but I didn’t feel bad about it, because in the end it still served a purpose for me as an Asian-American male.

Everyday I check my dashboard I anticipate negative comments from someone saying exactly what I see the show as, and with that being said, since my sentiment on the seeing the show as vain and valueless, but entertaining and also racially boundary breaking, it makes me okay with any criticism thrown my way.

My policy on narcissism is it doesn’t hurt anyone, but yourself.

I was hoping at best I could sell the show or get some network to pay me to do season 2. So I could buy a camera that shoots well at night, and funding to pay for me to get into venues, my transportation, my food, and hopefully my rent.

In the meantime, I shouldn’t wait because time waits for no one. So I’ll continue on as usual, but alone until further notice and hope someone picks up the show or hires me as a host to do video journalism for something so I can work in the industry I’m passionate about.

Overall the show is a multi-purpose vehicle serving my ego, yet breaks stereotypes and puts a Southeast Vietnamese male in the spotlight with anti-blackface hip-hop (in a country that wants to marginalize us), and could also possibly land me a job in the film industry, and or at the very least is video journalism with a personal touch of drama, because … it’s good for the ratings. 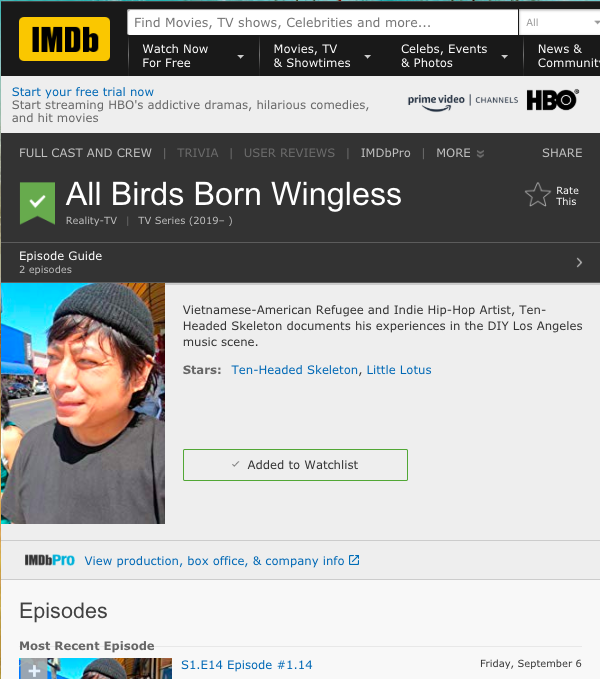